Pneumothoraces are a common problem in the ER and the ICU.  The traditional screening test for a pneumothorax in the hospital is the chest radiograph; however, chest radiographs are not very sensitive in the setting of trauma and in ventilated patients.  A recent study of 225 trauma patients demonstrated that an AP chest x-ray had only 20.9% sensitivity for detecting a pneumothorax versus a CT scan of the chest.[1] A chest CT scan is the gold standard for the diagnosis of a pneumothorax, but a CT scan is extremely expensive and exposes a patient to about 7 mSv radiation (the equivalent of 70 chest x-rays).  Another modality that is gaining traction as the principal diagnostic modality to evaluate for post-traumatic pneumothoraces is a transthoracic ultrasound.  Thoracic ultrasound look for the presence or absence of lung sliding, comet tail artifacts, A line, a lung point, and a “Seashore sign” or “Bar code sign” on M Mode sonography to determine whether a pneumothorax is present.  A transthoracic ultrasound takes only a few minutes to perform and is performed as a part of the E-FAST exam right in the trauma bay of the ER.  It costs nothing, is associated with no radiation exposure, and requires no transport of the patient.

A recent blinded, prospective trial performed at the University of Tennessee evaluated 79 patients at a Level 1 trauma center who received an initial chest x-ray, CT scan and thoracic ultrasound.  They found a total of 22 pneumothoraces by chest CT scan.  Transthoracic ultrasound detected a pneumothorax in 18/22 patients (81.8% sensitivity, 100% specificity, and negative predictive value of 93.4%).  Conversely, chest x-rays had a 31.8% sensitivity and a 79.2% negative predictive value.[2] A similar review of trials conducted between 1965 and 2009 was done of adult patients who suffered blunt chest trauma.  This review evaluated the relative sensitivity of a thoracic ultrasound with a supine AP chest X-ray for the diagnosis of pneumothoraces.  The sensitivity of thoracic ultrasound ranged from 86-98% and the specificity ranged from 97-100%.  Conversely, a supine AP chest X-ray had a sensitivity of 28-75% and a specificity of 100%.[3] In addition, it was very rare that a pneumothorax missed on an E-FAST exam eventually required tube thoracostomy for treatment. In addition, the time to proficiency is short.  In one study, surgery residents were trained for 1 hour on E-FAST exams and having completed 5 normal exams had a sensitivity of 97% in trauma.  This was compared to a sensitivity of 79% for supine AP chest radiographs.

A recent meta-analysis was conducted that evaluated all articles published in English that utilized either ultrasonography, chest radiograph, or both to diagnose a pneumothorax.  The meta-analysis retrieved 20 articles and over 7,000 patients.  The pooled sensitivity and specificity of ultrasound performed by non-radiologist physicians was 89% and 99%, respectively.  The sensitivity and specificity of chest radiographs was only 52% and 100%, respectively.[4] Similar results were found in both trauma patients and in mechanically ventilated critically ill patients.

These data support the use of transthoracic ultrasound as the initial screening tool for pneumothorax diagnosis.  Although the specificity of chest radiograph and bedside ultrasound are essentially equivalent, an ultrasound is much more sensitive than chest radiograph for detecting a pneumothorax.  In addition, the diagnostic characteristics of a transthoracic ultrasound compares favorably with a chest CT scan with much less cost, time, radiation exposure, and no need for patient transport. 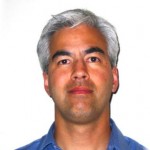 Joseph Esherick, MD, FAAFP is the Associate Director of Medicine and the Medical ICU Director at the Ventura County Medical Center in Ventura, California.  He is also an Associate Clinical Professor of Family Medicine at The David Geffen School of Medicine at UCLA. He received his medical degree from Yale University School of Medicine, New Haven, Connecticut, and completed a family practice residency at the Ventura County Medical Center, Ventura, California. He is board certified in family medicine and the author of the Tarascon Primary Care Pocketbook and the Tarascon Hospital Medicine Pocketbook. He is one of the lead instructors of the Hospitalist and Emergency Procedures Courses for Hospital Procedures Consultants. He is also an editorial board member for Tarascon Publishing and for Elsevier’s First Consult.